I first handled clay at infant school  in Scarborough but it was always squished  and put back in the cupboard. A love of clay is never forgotten, so when living in South London I enrolled in the marvellous Morley College and spent up to 2 days a week in pottery classes, as well as sculpting, drawing and mosaic. Ceramics was taught by Duncan Hooson (pundit on 'the Great Pottery Throwdown) and Jill Crowley. In 2009, at Cleveland College of Art and Design (AA2A programme), I spent time developing glazes, experimenting with porcelain and mould making.

After 20 years of working in London I returned to the North and moved to the North York Moors National Park. I bought an ancient school kiln, a wheel, and dug out my sketch books. After a succession of freezing sheds around Ryedale I found a lovely small studio down the road.

I've exhibited in various galleries including the Ryedale Folk Museum Gallery and the Inspired By gallery at Danby. I also participated in North Yorkshire Open Studios in 2011 & 2012. I'm a past member and Chair of Ryedale ArtWorks.

I particularly enjoy delivering workshops and helping people of all ages and abilities get their hands dirty and develop their creativity. 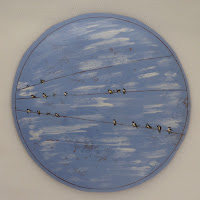 Bird series
I make very few of these because I don't want the painting to become formulaic. I tend to play with different shapes, shades and formats to keep my interest and favour a round shape because it suggests the infinity of the sky.